On our first evening in Vilnius (Vilna, Wilno, ווילנע), we heard reports from our tour guide that the city’s newly elected mayor had finally decided to remove the four statues adoring the Green Bridge, one of the most important crossings of the Neris River, which runs through the city. The four statues–one with two hetero couples, the others two men and two women respectively, represented productivity…and post WWII fecundity at a time when the Soviet Union, and therefore Soviet Lithuania, were rebuilding a devastated wartime population.   If Lenin statues, which still adorn Belarus, have long been relegated to one of the Soviet statue parks in post-Soviet states, I had to bear witness to the removal of one of the last remnants of Soviet aesthetics from Vilnius. 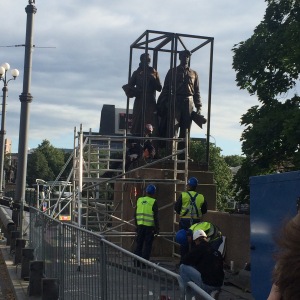 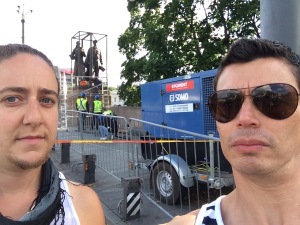 And in another moment of Helix spontaneity, Rob and I illegally recreating the statues that once adorned the southeastern plinth.  Needless to say, we had many passersby taking our picture. 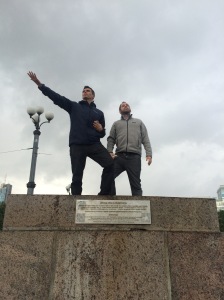