Once upon a time, Rabbi Eliyohu Ben Shloyme roamed the streets of this beautiful medieval city, which has had a continuous Jewish population since the mid 14th century. This 18th century rabbi, who earned the name “the Vilna Gaon” or ” genius” (one translation of the Hebrew word “gaon”) fought fierce battles with the Hasidim, whose mystical piety and ecstatic prayer clashed with traditional notions of study and observance of Jewish law as the route to status and holiness for men in Judaism. Today I also learned that in the late 18th century, local scholars at Vilnius University, one of the oldest in the world, would seek out the Gaon’s (or the Gra, another name for Eliyohu) advice because, as our local tour guide Regina suggested, “it was as if he had seven PhDs, from the sciences to law.” His influence on Judaism, in addition to its role as the home of the infrastructure of modern Jewish print culture, earned  Vilna the name, “Yerushaloyim d’Lite (the Jerusalem of Lithuania). 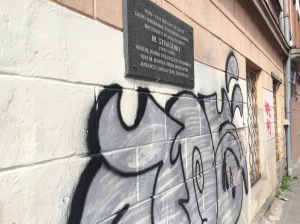 The Gaon’s story shaped our first full day in the capital of Lithuania. In the morning we walked over to the Jewish Community Center to meet Fania Brantsovskaya, a beautiful 93 year old woman, who captivated us with stories of her childhood in Vilna between the wars and then her harrowing account of survival in the Vilna ghetto and flight to the partisans, which ultimately saved her life. Of a family of 60, she was the sole survivor.

She briefly mentioned the repopulation of Jewish Vilnius after the war with Jews from other parts of the Soviet Union, because…well…there were very few survivors from the city itself after German occupation. Today’s Lithuanian Jewish community numbers 5-6,000 in Lithuania, most of whom live in the capital.

Today, this established Soviet-era Jewish community vies for influence with the relative newcomers to Vilnius, the post Soviet Chabad community, whose presence can be felt throughout the region. In fact many of the active synagogues today have a photograph of Menachem Mendel Schneersohn, the Chabad rebbe who passed away in 1994. No one has taken the rebbe’s place since his death. On this trip, we have generally encountered Chabad when we have had meetings at local active synagogues, in Bobruisk and possibly in Mogilev, although I don’t remember a picture of Schneersohn there. But Vilnius is the first place with multiple contemporary Jewish communities.

After our meeting with Fania, who works as the librarian for the Vilnius Yiddish Institute’s library, we had lunch and then toured Vilnius University’s ornate buildings depicting the glorious history of the university. Most of the decoration appeared after Lithuanian independence from the collapsing Soviet Union in 1990, but one particularly stunning wall mural in the halls of the Department of the Lithuanian Language was commissioned in 1985, still in Soviet times. If only I had an office that looked like that!

The city has commemorated its Jewish history in odd ways, in particular with a focus on its destruction in the Holocaust, as “the ghetto” has become a central tourist site for the city. Our fearless leader, Rob, invited us to imagine what the city would look like if, instead of reminders and remainders of Jewish destruction, the city’s new mayor instead rebuilt the old grand synagogue (today a kindergarten) or marked the locations of the dozens of interwar Jewish schools, each competing for the hearts and minds of Jewish parents eager for their children to have the best education: Yiddish schools of various political persuasions, religious schools divided by sex, Polish Jewish schools (since Wilno was a major city of interwar Poland and the home to important Polish writers, who studied at the city’s university like Czeslaw Milosz and Adam Mickiewicz), and of course the Tarbut Hebrew-language schools.

Near the end of our walking tour we came to the modernist bust of the Vilna Gaon and declamed another Moyshe Kulbak poem, the muse of Helix, this one called “Vilna.” First in Yiddish, then in English, we read the haunting poem that reminded some in our group of Walt Whitman.

We have been animating this burgeoning city with the presence of its Jewish past. But today’s Vilnius (not Vilna or Wilno…I’ve been teasing Rob that he continues to use the Yiddish street names, which are utterly meaningless to our group which needs to navigate the city in 2015, not 1935) is a place of fevered activity, which reflects its status as an integral part of Europe (if for no other reason than the regular Easy Jet flights, which have done more to integrate Europe than the euro). At the same time, as the removal of the last Soviet statues from the city’s Green Bridge on our first evening in the city reminded me, it is also a city and a country searching for a post Soviet identity trapped between its glorious yet haunted past and an optimistic but tenuous future as an independent EU country and former Soviet republic bordering on resurgent Russia.